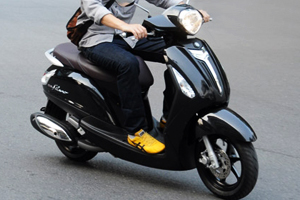 One of the biggest Japanese manufacturer of motorcycles, marine products such as boats and outboard motors, and other motorized product known as Yamaha and its global partner in Indonesia, PT Yamaha Indonesia recently announced that for the upcoming of Pekan Raya Jakarta 2015 they will release the completely build up Yamaha Grand Filano. The premium motorbike will be one of two new motorbikes from abroad (previously they have announced the release of Yamaha MT-09). According to Mohammad Masykur who is the Assistant General Marketing of Yamaha Indonesia Motor Manufacturing, “We did bring the Yamaha X-MAX 125 because the expectation is too high and too risky for our business.” Yamaha Grand Filano itself is armed with first-generation of 125 cc Blue Core engine. That kind of engine is also embedded in other scooter that are sold in Vietnam, Nozza Grande. Although the name of the home production of Grand Filano has been popularly known, but Mr. Mohammad Masykur still in doubt about which countries will export their upcoming motorbikes.

The annual activity of Pekan Raya Jakarta will be held on May 29th 2015 until July 5th 2015. The presence of two Yamaha Completely Build Up models at such event will definitely be the main attraction of Yamaha Indonesia to compete in the national automotive market. In the previous year, they had four Completely Build Up models, such as R1, R6, T-MAX and WR250R. Besides being used to attract the attention of visitors at their booth, it is not impossible that Yamaha Indonesia Motor Manufacturing will also take its advantage to do the marketing and sales of Grand Filano. But unfortunately no one could say about their upcoming plan for Pekan Raya Jakarta 2015. Mr. Mohammad Masykur only stated that the retail price for Yamaha Grand Filano will soon be mentioned as they follow the fluctuations in the exchange rate with US dollar. The uncertain condition that happens in Indonesia become the main factor to determine the retail price for CBU vehicles.

According to few peoples, the upcoming Yamaha Grand Filano will soon become the most affordable Completely Build Up models by Yamaha Indonesia Motor Manufacturing. The price position of the premium scooter is above any other 125 cc scooters from Yamaha, such as Soul GT which is cost around IDR 15.1 million and Mio that cost around IDR 13.98 million Rupiah. However Mr. Mohammad Masykur revealed that logically the Grand Filano will have have a price tag between IDR 20 to 30 million Rupiah. Furthermore he stated, “It will compete with Vespa Piaggio.” For your quick information, Piaggio Indonesia currently sells two models of scooters, such as Beverly 330 cc engine which is sold at IDR 180 million and Liberty of 100 cc engine that cost you IDR 19.2 million Rupiah. Yamaha Grand Filano first making its debut in Indonesia at the Indonesia Motorcycle Show, which was held last year. It was previously known by the name of Nozza Grande in Vietnam. It also became the first motor that carries the Blue Core tech engine. For further information about Grand Filano and Yamaha Indonesia, feel free to visit their official site.